Cheap Windows laptops are notorious for their terrible battery life, chunky builds, and general unreliability. But at just $330, the iPad sports staggering 10-hour battery life and weighs significantly less than any budget laptop. And, while the iPad is technically a just tablet, its robust selection of standard productivity apps and professional-grade accessories make it a practical (and comfortable) alternative to Windows machines. Like most tablets, the iPad makes for a fantastic entertainment device. It works with all streaming services, it can play a wide variety of games (from Minecraft to GTA San Andreas to Civilization VI), and its compatibility with eBook apps should satiate anyone’s literary needs.

But the iPad isn’t just a toy. It works with a variety of productivity suites, from Google Docs to Microsoft Office. Additionally, the iPad’s performance while running professional creative apps like Procreate (drawing), BeatMaker 3 (music making), and Adobe Lightroom (photo editing) is unmatched by any similarly priced PC or laptop.

And just to be clear, these professional capabilities are a major focus of the iPad’s design. They aren’t just thrown together with tape and glue. Unlike cheap Windows laptops, the iPad doesn’t experience slowdowns under the strain of browser tabs, multiple applications, or streaming video. Apple regularly updates the iPad with new productivity features, such as split-screen controls and USB device compatibility, and the iPad’s gesture controls and compatibility with accessories ensure that it’s comfortable to use in any environment.

We should also take a moment to mention that the iPad integrates perfectly with iOS and Mac products. Any apps or games purchased on your Apple account are available on both the iPhone and iPad, and the iPad works flawlessly with iMessage and FaceTime. Additionally, the iPad works with AirDrop, making it easy to move files between local Apple devices.

The iPad Works with Keyboards, Mice, and Other Accessories The iPad’s touch and gesture controls are arguably some of the most intuitive and reliable on the market. Still, typing on the iPad without a keyboard is a challenge, and touch controls aren’t always ideal for working, messaging others, or browsing the web.

But that’s where the iPad’s accessories come into play. The iPad Keyboard is potentially the most essential iPad accessory, as it transforms the iPad into a more conventional device for working, browsing, messaging, or taking notes. Of course, the iPad works with any Bluetooth or wired keyboard, and third-party keyboard cases (especially those by Logitech) can serve as affordable alternatives to Apple’s official iPad Keyboard.

While a combination of a keyboard and touch controls are enough to fulfill most productivity needs (that’s how this article was typed out), the iPad’s ability to work with conventional wireless and wired mice (as part of the March 24th iPadOS 13.4 update) makes it a compelling laptop alternative to even the most vocal naysayers. There are even options for people who prefer to work with a keyboard and trackpad, such as the Magic Keyboard and the Logitech Combo Touch. These trackpad keyboards are expensive, but their convenience factor and built-in gesture controls (which are similar to those on a Mac) offer a more laptop-like experience than any other accessories.

It’s also worth noting that the Apple Pencil and other third-party styli are essential tools for creative work on the iPad, and can often stand-in for mice and trackpads. Most Bluetooth accessories, such as headphones (shout out to AirPods) and gamepads also work with the iPad, and wired USB accessories can plug into the iPad’s lightning port through the use of an adapter. 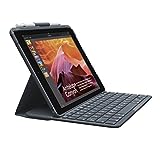 Which iPad Should I Buy, and What Accessories Do I Need? Shopping for an iPad can be a little daunting. YouTube reviewers and tech geeks like to pretend that the iPad Pro is the only worthwhile option, and it’s easy to get tripped up on Apple’s confusing naming scheme.

So, let’s clarify a few things now. The basic iPad ($330) is well-optimized and runs on a powerful A10 Fusion chip. It’s loaded with the same operating system as the iPad Pro, and it can endure an exceptional amount of strain before it experiences any slowdowns. Accessory-wise, the basic iPad works with everything but the 2nd generation Apple Pencil and the trackpad-equipped Magic Keyboard (it works fine with the 1st gen Apple Pencil, the official iPad Keyboard, and third-party keyboards options—some of which have trackpads built-in).

If you think that you’ll need more processing power than what the basic iPad has to offer, then the iPad Air ($500) may be a better option for you. It’s built with an A12 Bionic chip, which provides faster load times than the basic iPad’s A10 chip and reliability that’s comparable to the 2020 iPad Pro’s A12Z Bionic chip. It also comes with the added benefit of a 10.5-inch True Tone display, which is slightly larger and offers more color accuracy than the basic iPad’s 10.2-inch display. In terms of accessories, there isn’t any difference between the iPad and iPad Air.

For most people, the basic iPad and iPad Air are steller alternatives to a cheap laptop. They’re affordable, they have a 10-hour battery life, and they’re significantly more reliable than similarly priced Windows machines. We would only suggest buying an iPad Pro if you’re concerned about the iPad and iPad Air’s 10.2-inch and 10.5-inch screen sizes. These are reasonably comfortable displays, but they may feel small to people who are used to 14 or 15-inch laptops. Apple just released the 2020 iPad Pro, so the 2018 model is likely to go on sale soon.

But what accessories should you buy? Well, you’re using the iPad as a laptop alternative, so we suggest starting with a keyboard. A keyboard case, like the official iPad Keyboard, the Logitech Slim Folio, or any third-party option will provide the most laptop-like experience (although you could always use a full-sized wireless keyboard). From here, you may want to buy a wireless mouse for desktop use, and the Lightning to USB dongle for things like external drives and wired printers. (Apple also sells a Lightning to USB dongle with pass-through charging.)

The Best iPad for Most People If you can’t get behind the iPad as a cheap laptop alternative, but you still want a device with stellar battery life and fast performance, then a Chromebook is likely your best option.

Chromebooks are designed like regular laptops and utilize a lightweight operating system that feels similar (yet a lot more intuitive) than Windows. Most Chromebooks in the $300 to $500 price range sport an 8- to 10-hour battery life, and many are constructed with lightweight components that are more comfortable to use than similarly priced Windows machines.

Shopping for a Chromebook isn’t always an easy experience, as there are a ton of Chromebooks to choose form. In our Chromebook shopping guide, we suggest sticking with devices that sport an Intel processor for extra speed and reliability. The Lenovo Yoga C630 and ASUS Chromebook Flip are fantastic options in the $400 to $500 range, while the Lenovo C340 makes for a solid option in the $300 range. 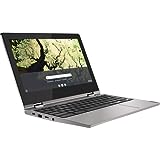