What you put in your office says a lot about you. It shows what you’re most interested in and passionate about. And, with such a wide variety of sets and themes, LEGO is the perfect brand to decorate your office with. LEGO is one of the best sources for models of vehicles, buildings, and characters—whether they’re realistic or fictional.

As far as selecting sets for this list goes, we mostly just tried to focus on LEGO sets that look great above all else, and ones that are fairly compact and budget conscious. Also, we tried not to select any sets that are too flashy, as these builds should just be an accent piece to your office—not the main draw. The ship in a bottle is a pretty classic piece of office decor, and this nautical build goes the extra mile with a detailed display stand featuring a compass, two tiny globes, and even a nameplate. The ship itself looks pretty good considering the size restriction, and the “water” inside the battle is a great touch.

We do want to warn you, however, that the finished build might be a bit bigger than you expect, measuring in at 5 inches high and 12 inches long. 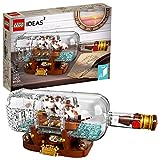 I think we can all agree that dinosaurs are pretty cool, and by extension, so are fossils. And, while it is not financially feasible to own a real T-Rex fossil for your office, this LEGO one should suffice. This set actually comes with enough pieces for three different dinosaurs skeletons: the T-Rex, Triceratops, and Pteranodon. All of them look great, and the smaller things included in the set (such as the dinosaur egg and paleontologist minifig) are fun additions. Unique architecture and landmarks are a draw for cities around the globe, and LEGO set out to capture many of these iconic cities with its Architecture Skyline series. Each of these features a few iconic buildings and other landmarks from each respective city.

The buildings are recognizable, and the overall builds have plenty of smaller details that make them feel complete. You should be aware before purchasing though, that these are pretty tall, with some being over 12 inches high, so we recommend checking out the measurements before purchasing. DOTS is a brand-new theme that LEGO just launched, all about customizable builds specifically made for room decor. While some may label the builds as childish, we prefer to call them “fun.” These two sets allow you to create common office organization items and then customize them with the set of included extra bricks. You can do whatever you want with this, which is a fun element of creative expression.

The pencil holder is fairly standard once built, but it does come with a small container for items like paperclips. And, the picture holders set comes with three holders based on different animals, and each holder has a small storage compartment in it as well.

Because DOTS is a fairly new theme, you can currently only find the Pineapple Pencil Holder ($19.99) and Animal Picture Holder ($14.99) on LEGO’s website. This is without a doubt one of the most visually striking sets LEGO has ever put out. Based on the classic Disney animation Steamboat Willie, this monochrome build is just great. The details are spot on, the color scheme is eye-catching, and the minifigs are just perfect. If you’re a fan of animation, or just want a classy LEGO set, this is a fantastic option. Model cars are cool and all, but wouldn’t they be better if that car was made out of bricks? Fortunately for you, LEGO has the answer. The Speed Champions theme is full to the brim with cool car builds. We chose to showcase the Porsche 911 Turbo ($14.99) and Ferrari F8 Tributo ($19.99) in particular because, frankly, we just think they look the coolest. But there are plenty of other cars available in this theme as well. LEGO’s 3-in-1 kits are pretty cool, providing some nice variety compared to LEGO’s other sets. And, the Shuttle Transport set is great for any space fan, as the shuttle itself is relatively accurate considering the size. The mini-satellite that rests inside is a great bonus.

The other two builds—a helicopter transporter and caravan—aren’t related to space, but they’re still great builds regardless. 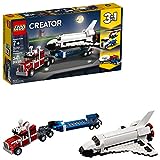 The Batmobile is such an iconic vehicle, and this budget set perfectly captures many of its more eye-catching details. Obviously, considering the small size, some smaller details are missing, but it still looks the part. The included Batman and Joker minifigs are great to have as well.

If you do want a full-blown, highly detailed Batmobile to be proudly displayed, LEGO also offers a much more expensive set based on the 1989 Batmobile (3,306 Pieces). One of Overwatch‘s greatest aspects is the characters, and thanks to a recent partnership with LEGO, you can now have brick-ified versions of them sitting on your shelf.

There have been quite a few Overwatch sets already, and we chose these two for their compact size and accuracy. Reinhardt’s and D.Va’s mechs both look amazing, and Wrecking Ball is just as wonderfully ridiculous in LEGO form as he is in the game. For any fan of Overwatch and LEGO, these feel like must-haves. If you want a bite-sized piece of the blocky world for your office, we recommend this LEGO Minecraft set in particular for its compact design. This build is small, but it’s still well-detailed and looks great from every angle. The set comes with a Steve, Zombie, and Baby Zombie minifig, and even a couple of brick-built bats for some added life. There are a lot of LEGO Star Wars sets, and most of them make for good decoration. But a lot of them are also large and expensive, so we chose the A-Wing for its nice balance of size and price, while still looking accurate to the films. You also get the two minifigs pictured above, which are nice too have.

If you want some other budget-conscious Star Wars ships, the TIE Fighter Attack (77 Pieces),  Snowspeeder (91 Pieces), and Anakin’s Jedi Starfighter (247 Pieces) sets all do a good job balancing accuracy and size as well for just $19.99 a set. So, while these aren’t out yet, but they’re too cool not to mention. These brick-built helmets from the galaxy far far away are just amazing pieces of decoration. They look accurate to the films while still giving off that brick-built charm, and the included display stand looks nice while not distracting from the actual helmets.