Google Assistant makes completing digital tasks easier, but it can be inaccessible for those without dextrous fingers or a steady voice. With the Action Blocks app for Android, you can turn complex commands into a single digital button press.

What Are Action Blocks?

Action Blocks is an Android app from Google that lets you reduce complex smartphone tasks from dozens of different actions down to a single tap. Millions of people around the world face a vast range of obstacles that prevent them from engaging with the Google Assistant to play YouTube videos or control smart home devices.

RELATED: Android’s Newest Features Focus on Accessibility for Everyone

Google engineer Lorenzo Caggioni first created the predecessor to Action Blocks for his brother, who was unable to use most technology due to his disabilities. Project DIVA, which is short for DIVersely Assisted, uses a Raspberry Pi and Google Assistant to give more independence to those with the inability to perform specific tasks on a smartphone.

Developers can use Project DIVA to assign tasks to a physical button that then runs multiple complex digital tasks with a single push.

Action Blocks uses digital buttons instead of DIVA’s physical ones and provides a user-friendly interface that you’ll use to arrange complex processes into one single press. Much like Google Assistant’s Routines, these Actions Blocks can perform all of the tasks that your virtual assistant is capable of doing.

How to Set Up Action Blocks

To get started with Action Blocks, download the app from the Google Play Store to your Android device. Make sure that you’ve enabled Google Assistant on your phone.

Once the Action Blocks is installed, launch the app and tap the “How It Works” link to learn more about what it’s capable of doing. Start making your own digital buttons by selecting the “Create Action Block.” Select one of these actions to bring up a templated Action Block, or choose “Create Custom Action” to use a blank Action Block. 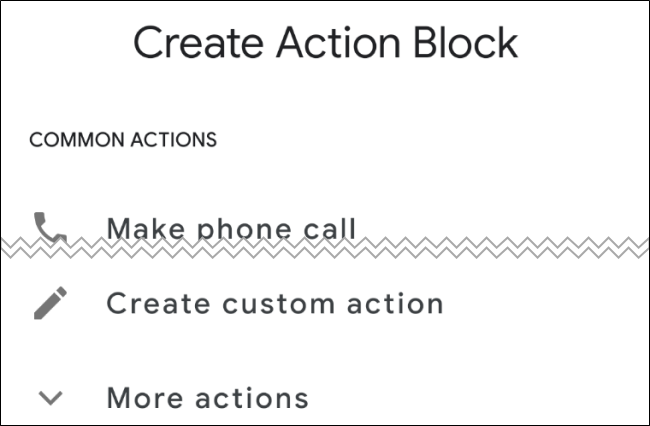 If you choose a template for a specific action, you’ll see that the Google Assistant command for that action is already written. Edit the command as you see fit. If you don’t want Google Assistant to announce the action out loud every time this Action Block is used, ensure that the “Always Speak Action Out Loud” option is unchecked.

Use the “Test Action” button to make sure that this command does what you want it to do. Tap “Next” at the bottom of the screen when you’re finished editing and testing this command. Next, you’ll want to create a unique name for this Action Block. From there, select an image to help identify the button from your photo library or Google’s library of symbols and icons, or snap a fresh picture with your camera. When you’re ready to proceed, tap “Save Action Block” at the bottom of the screen. Once your Action Block is saved, you can place it automatically onto your home screen or create more Action Blocks and place them later. Action Buttons have a default size of 2×2 on your Android smartphone’s display. Press and hold your Action Block widget until four dots mark the perimeter of the block to move or resize it.