The Xbox Game Pass Ultimate subscription is a no-brainer if you’re an Xbox fan or even a PC gaming fan. Simply put, it’s one of the best values in gaming today, especially if you like to go back and forth between console and PC playing. And that’s why you should jump on Amazon’s deal today; you can grab three months for $25, which is $20 off the usual price.

Unlike previous Xbox Game Ultimate deals we’ve featured, there are no codes to input or waiting for physical cards this time. Just head to Amazon’s page and buy the Pass, you’ll get the discounted pride right away and a digital code to redeem

Once you convert, then apply the three-month digital code. Now you have Game Pass Ultimate for quite a few months, and all you paid was $26. It’s a great way to get a lengthy subscription for less. But you better act fast before the price goes back up. 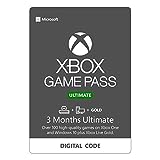