Microsoft’s upcoming xCloud game streaming service should launch later this year, but unlike Google Stadia, it didn’t have an official controller. You could buy some clips for your Xbox controller, but that’s not very portable. Now, 8Bitdo is here to help with a slim Xbox controller that takes inspiration from the SNES.

But 8Bitdo did pack plenty of features into the package, including 18 battery life, USB-C for charging, and Bluetooth to work with most Android phones. It even comes with clips to attach your phone.

Xbox purists (like myself) may balk some at the joystick placement though—on this controller, they are side-by-side like a Playstation controller, instead of having the left joystick above the D-pad. Still, it’s a small concession to get a small controller that works with xCloud.

8Bitdo is taking pre-orders on the Sn30 Pro today, and will release the controller on September 21st, 2020. 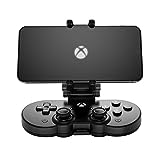