All iPhone 12 models support 5G. While some Android phones support 5G, this is the first Apple is releasing phones that support 5G. So are ultra-fast speeds available everywhere? And what does 5G mean for battery life? We’ll break it down.

Which iPhones Have 5G?

Future iPhones will all likely support 5G, too. However, older iPhones like the iPhone 11, iPhone XS, iPhone XR, and iPhone X do not support 5G. This feature requires new hardware inside the iPhone and cannot be added via a software update.

Here’s the problem: Millimeter wave technology is short range. In dense urban areas, it may be worth the investment to install the necessary amount of base stations for widespread coverage, and millimeter wave may deliver high speeds.

But not everywhere covered by 5G will be covered by millimeter wave base stations. Smaller towns and the countryside would need many more base stations deployed closer together. Realistically, the cost of this deployment means 5G in most small towns, rural areas, and suburbs likely won’t get close to the promised fastest speeds. They will get “sub-6” 5G that is more similar to 4G LTE.

5G is an upgrade—and it allows for very fast speeds in ideal circumstances with densely placed cellular base stations—but those blazing-fast 5G speeds aren’t about to appear everywhere throughout the entire country.

Thers’s another problem: In some cases, 5G networks have shown slower speeds than 4G LTE networks. In September 2020, a PCMag test found that AT&T’s 5G network was slower than its 4G LTE network in nearly every city tested. This is a result of the way AT&T has chosen to deploy 5G and can be fixed by cellular carriers—but it shows how upgrading to 5G isn’t necessarily an improvement in 2020.

RELATED: Not All 5G Is Equal: Millimeter Wave, Low-Band, and Mid-Band Explained

Will 5G Drain Your iPhone’s Battery?

One reason why iPhones likely haven’t included 5G in the past—in addition to the cellular carriers needing more time to build their 5G networks—is that it can use more battery power.

Apple says the iPhone’s antennas will automatically switch between 4G LTE and 5G mode to save battery power. When your iPhone doesn’t need 5G, it will use 4G LTE. When 5G speeds will help, your iPhone will switch to 5G. This is called “Smart Data Mode.”

We expect that Apple has waited for the technology to mature and you won’t see iPhone battery life shrink due to 5G.

Where Is 5G Available?

If you’re wondering where 5G service is available, you can check your cellular provider’s website. For example, AT&T, T-Mobile, and Verizon all have 5G coverage maps. You can zoom in and check the color-coded map to see what your cellular carrier reports is available in your area. 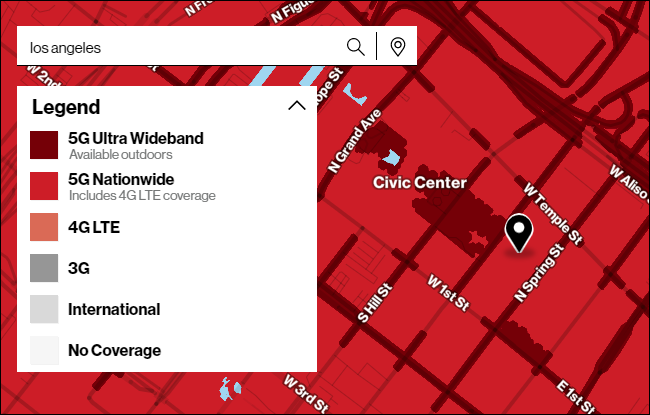 You may want to search for “millimeter wave 5G” and the name of your cellular carrier or city to see if your carrier has announced whether it’s available in your city.

Will You Have to Pay Extra for 5G?

While you definitely need a 5G phone to take advantage of 5G, you likely won’t have to pay extra for 5G service. Cellular carriers are offering 5G service as part of their standard cellular plans.

Verizon was planning on charging an extra $10 per month for access to the 5G network, but axed this plan in August 2020. We aren’t aware of any cellular carriers in the US that charge extra for 5G.

Should You Care About 5G?

In the long term, 5G is an important upgrade. Cellular data can be much faster in dense urban areas and stadiums, for example. If millimeter wave base stations are deployed more widely, 5G could even transform your home internet connection. Speeds similar to 4G LTE should become more widespread and reliable even in less dense areas.

In the short term, most people probably aren’t near mmWave base stations enough to see those fast speeds. Worse yet, 5G networks need more time and may be slower than their 4G equivalents. Hopefully, the iPhone will be smart enough to use 4G LTE networks when they’re faster than 5G ones.

Apple’s release of a 5G iPhone is an important step. 5G is the future, and cellular carriers will start getting even more serious about it with so many iPhone users taking advantage of it.

Here’s the good news: All iPhone 12 models support 5G, and they all support millimeter wave (mmWave) technology. If you’re upgrading to a new iPhone, you’re getting 5G support, and those 5G networks will get better the longer you keep your iPhone.

But, if you’re happy with your iPhone and you’re thinking about upgrading just for 5G, we don’t recommend it. 5G still needs more time before it’s really valuable to most people.

Of course, if you live in a dense urban area next to mmWave-capable base stations, maybe a 5G-capable iPhone would be a worthwhile upgrade! But most people aren’t in that situation.

RELATED: What Is 5G, and How Fast Will It Be?